March 9th, 2016:  The Irish Question
In 1912, it seemed that the Irish Question was on the point of being resolved. Home Rule seemed  inevitable, and the wishes of the majority of Irish people were being fulfilled after many generations.  But a decade later, Ireland was partitioned, and a new Free State had been established through most  of the island, modelled on the Canadian Dominion. Those ten years had seen mutiny, insurrection,  constitutional turmoil and all-out war. This first part of a two-part talk will cover the first part of  the decade and examine why such an apparently hopeful scenario in 1912 was to lead to  revolutionary changes in the very character of both Ireland itself and her place in the United  Kingdom.

​April 13th, 2016:    A Terrible Beauty is Born: Easter 1916 and after
The Easter Rising of 1916 came as a profound shock to almost everyone in Ireland and Britain, and was to completely change the position of the Irish, as they saw themselves. Constitutional ways were overthrown by physical force and within five years a new and independent Ireland was to face a civil war as the forces unleashed by the revolutionary decade tore the people apart. New beginnings were matched by tragic losses, and the politics of the new state would be fixed for generations. 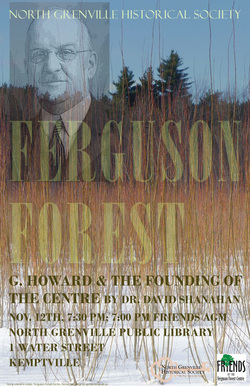 12 November 2014
The Friends of the Ferguson Forest Centre and the North Grenville Historical Society held a joint meeting, immediately following the Friends' Annual General Meeting.  The speaker was Society Historian, Dr. David Shanahan, who has been researching the history of the founding of the Centre and the role G.Howard Ferguson played in its coming to Kemptville. 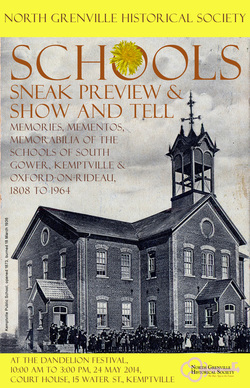 24 May 2014
In preparation for the publication of a book on the schools of South Gower, Kemptville and Oxford-on-Rideau, we held an open house and display during the Dandelion Festival at the Archives.  The unexpected popularity of this event surprised us all.  Many teachers and students came out to see what all the fuss was about and agreed to contribute their memories, photographs and school-related documents to the forthcoming book.
​This project was led by volunteer Doug MacDonald. 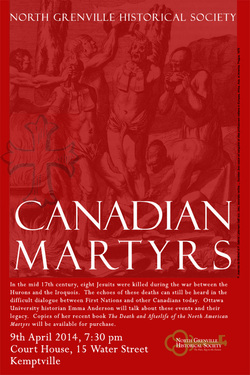 9 April 2014
In the mid 17th century, eight Jesuits were killed during the war between the Hurons and the Iroquois.  The echoes of these deaths can still be heard in the difficult dialogue between First Nations and other Canadians today.  Ottawa University historian Emma Anderson talked about these events and their legacy.  Copies of her recent book The Death and Afterlife of the North American Martyrs, which had an important influence on the recent “Canada Reads” winning novel, The Orenda, were sold at the event.
In 2013 it was most gratifying to see a marked increase in the number of new members who joined the North Grenville Historical Society. This increase impacted significantly on attendance at public meetings.

9 Jan 2013
The year began with the Annual General Meeting on January 9, 2013, followed by the Annual Heritage Awards Night which was held on February 18, 2013 at the Branch Restaurant. Harold Tompkins received the 1812 Bicentennial Award at this event. The Holy Cross Historical Committee and St. Paul’s Presbyterian Church in Kemptville were recognized for publications on the history of their respective congregations. Owen Fitz’Gerald received a Heritage Award for the “work that he has done in establishing and maintaining Veteran’s Way, at the Ferguson Forest Centre”. The Heritage Committee Award was presented to Phil Gerrard, a member of the municipal staff, who, for many years, has spent much of his time “working to record and preserve the many heritage buildings in North Grenville”.

13 March 2013
On March 13, Aleta Karstad and Dr. Fred Schueler, an artist/biologist team enlightened guests about the natural history of the region, focusing on the species that they have studied in detail: from the interbreeding of mussels after the Champlain Sea retreated around 8000 BC; the mystery of the monomorphic leadback Redbacks; the Buckthorn that took over Oxford-on Rideau fencerows in the 1980s; the disappearance of Chorus Frogs in the early 1990s, Zebra Mussels in the mid-1990s, and contemporary alien crayfish and Chinese Mystery snails.

10 April 2013
On April 10, Dr. David Shanahan spoke about the history of First Nations in North Grenville pre-1784 and provided a report on the draft treaty agreement on the draft Algonquin Land Claims Transfer which may apply directly to some land on the north side of the Rideau River, just west of Burritt’s Rapids.

8 May 2013
On May 8 Dr. Paul Thibaudeau, Intermesh Enterprises, gave a presentation entitled “Truck Stops and Mystery Houses; Archaeology in Eastern Ontario” which was about his recent excavations – a pre-contact site in Casselman and an historic site at Richmond.

Read more about this dig in the Carleton Now February 2011 issue.
25 May 2013
On May 25 the Ottawa Chapter of the Ontario Archaeological Society, which included Dr. Paul Thibaudeau, and the North Grenville Historical Society jointly hosted The Archaeological Road Show/Show and Tell – our contribution to the Dandelion Festival. It has been estimated that at least 100 people from our community took time to examine the artifacts, documents and panels that were on display. On a lighter note, many of our guests (young and old alike) requested that they be photographed in the jail cell at the Courthouse and on the 1914 re-furbished Fire Engine, which Chief Paul Hutt of the North Grenville Fire Department had graciously loaned to the NGHS for that occasion.

This event was such a success that in addition to articles in the NG Times, the Road Show/Show and Tell was featured in the June Newsletter of the Ottawa Chapter of the Ontario Archaeological Society and in a U.S. publication The Spinning Wheel Sleuth: a Newsletter about Spinning Wheels and Related Tools, July 2013, issue #81, pages 2-7. The article, entitled “Horton Row, Ontario Wheel Maker”, was written by Gordon Moat, who had appeared at the Road Show as Horton Row, and entertained those present with a demonstration of spinning on the NGHS great wheel which was made by Horton Row, an early craftsman and business man from Kemptville. (click on GALLERY to see more photographs of this event)
11 September 2013
Public meetings were not held in June, July and August but they resumed on September 11, 2013 with a slide presentation entitled “Stewardship and the Diefenbunker”, by Brendan Goodfellow, Facilities and Digitization Coordinator, Diefenbunker, Canada’s Cold War Museum, Carp, Ontario and Ian MacLean, RPA, FMA, Consultant, integrated Heritage Management, Almonte, Ontario.
23 November 2013
On November 23 the NGHS, in collaboration with the North Grenville Photography Club, hosted a wine and cheese reception at Geronimo’s coffee shop to launch an exhibition of photographs and documents showing the history of the one-room school house in North Grenville from the 1820s until 1965. Doug MacDonald (NGHS) and Larry Loke (NGPC) were instrumental in ensuring that this vernissage was a huge success. One of the sponsors of this event was the CIBC Kemptville Branch, and Amanda Guerin, Branch manager, attended the launch with her family. The exhibit remained on display until December 27, 2013 and comments received by Heather Childs from patrons of Geronimo’s were very positive.

Read more about this event in the November 27th 2013 Back Issue of the NG Times.